A sundial is a device that tells time using the position of the Sun, or more precisely using its hour angle, or sometimes its altitude. Sundials are usually installed on a wall facing south, or horizontal on a column, or sometimes oriented and inclined by any angle, and even drawn on curved surfaces.

Known since the most ancient times, sundials spread from the renaissance to the 19th century and then slowly became obsolete, due to the growing success of horology. People started to be interested again by sundials after the 1980s and this subject is today very popular. 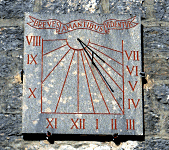 It is possible to design a sundial on any support (plane, cylindrical, spherical...), of any orientation and for any location. This web site shows several types of sundials but other types exist, sometimes more exotic than useful. The layout of a sundial (lines, arcs, texts) can be very diverse and can provide all kinds of information: solar time, civil time, season, date, Sun's declination, hour of sunrise or sunset, hour of another city, ...

If you intend to design your own customized sundial, you will find in this web site everything you need. You can start by downloading the freeware program Shadows that will do all the calculations for you and print all the drawings you need. 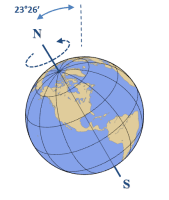 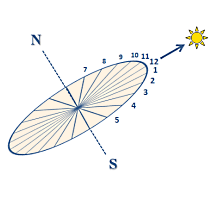 Solar time is directly derived from the Sun's position, by counting one hour of time every 15° of hour angle as Earth is rotating around its axis in 24 hours, which gives 360°/24 h = 15°/hour.

On a sundial, the noon line corresponds to the moment of culmination of the Sun, when it crosses the local meridian. This line is always contained in the North-South plane and is always vertical on a vertical sundial, regardless of its orientation.

This sort of time depends on the location, i.e. on its longitude.

All European countries use the same time zone, called CET (Central European Time), except United Kingdom, Ireland and Portugal which use the WET (West European Time) and some countries in the East of Europe which use the EET (Eastern European Time). Countries based on the CET time zone are located between the western part of Spain, with Vigo, and the Polish border in the East, meaning that they represent a range of 2 hours of solar time. For a city located at the east of the CET meridian, hour is shifted towards morning (sunrise and sunset are earlier). For cities located at the west of the CET meridian, hour is shifted towards evening (sunrise and sunset are later).

One shall calculate the longitude correction for its location, by comparing its longitude to the reference meridian (CET meridian is 15° East). Elsewhere on Earth, people shall know where is their reference meridian. The correction, for example, for Besançon, France (6° 02' East) will give: 15° - (6° 02') = 8° 58', meaning (8+58/60)*4 min = 35 min 52 s of time. When the Sun is at the South, in Besançon, it already passed 36 minutes ago at the South of the reference meridian. For a city at the East of this meridian, the correction will be negative (for example, for Warsaw, Poland (21° East), the correction is -24 minutes, so noon at Warsaw means 11 h 36 min at the CET meridian. 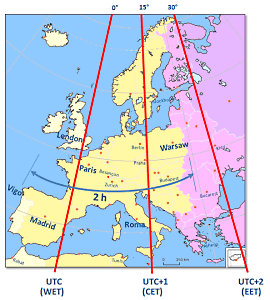 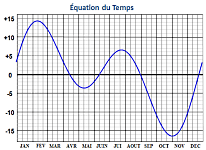 In order to get with a sundial the same hour as on a watch, you need to apply the longitude correction to solar time. But you also need to add the value of the equation of time and if required, another hour for the daylight savings in summer.

The equation of time is due to the annual variation of apparent speed of the Sun. This variation is coming from two causes: the excentricity of the Earth orbit, and the inclination of the Earth rotation axis on the ecliptic plane. It reaches + or - 16 minutes and is nulled 4 times a year. This equation is usually provided as a graph or a table, allowing people to fetch the value for the current date. 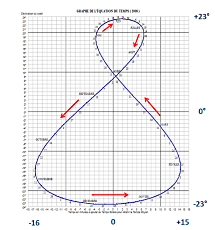 You can also use the same method to calculate when the Sun will pass to the South, at a given location. And by inverting the correction, you can calculate the solar hour for any civil hour. 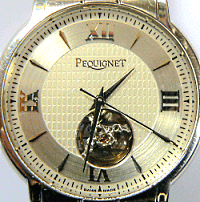 Hour lines on a sundial converge towards the same point, where the polar style is attached to the sundial, except when this point is rejected to infinity, as for direct East or West sundial, or polar sundials. 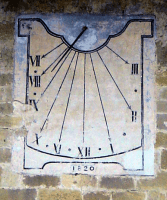 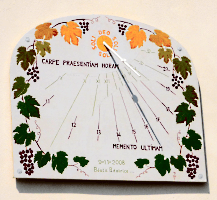 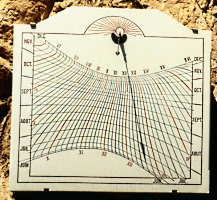 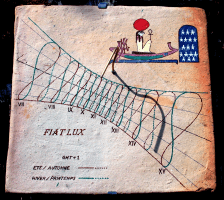 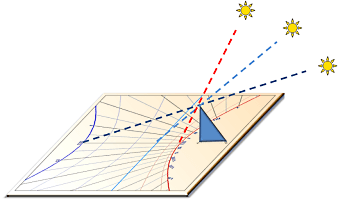 Depending on the moment in the year, the Sun's altitude is different. The shadow casted on the sundial is therefore longer or shorter and this length allows the calculation of particular moments such as solstices and equinoxes, or even dates or Sun's declination.

The most common way to draw declination arcs on a sundial is for each Zodiac change. This practice is not related to astrology but it is a simple division in 12 sectors of 30° of ecliptic longitude along the Earth orbit. This leads to 7 arcs, 5 of them being crossed twice by the Sun (when its declination is increasing and when it is decreasing), plus two for solstices (extreme declinations).

As Sun's altitude is varying between + and - 23° 26', it is also possible to draw arcs every 5° of declination, with the equinoctial line in the middle which corresponds to 0° of declination (Sun on the equator). 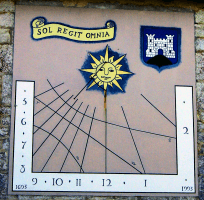 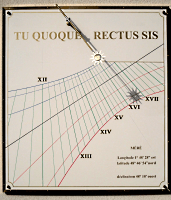 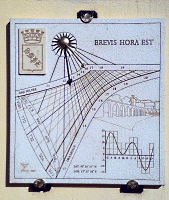 Unequal hours were also used. They count 12 hours between sunrise and sunset, or during the night between sunset and the following sunrise. Their duration vary from 40 to 80 minutes depending on the moment of the year, that is why they are called unequal hours.

Learn more about sundials with: