The most classical sundials are drawn on a plane of any orientation and reclination, by projection of an equatorial sundial. They all share a polar style.

The horizontal sundial is often installed on a column in a garden. The style points towards the pole and makes with the ground an angle equal to the latitude of the location.

Some large horizontal sundials are known, such as in the garden of Reuilly in Paris. 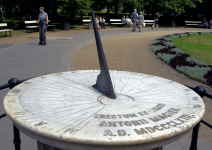 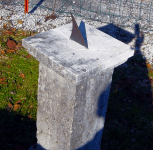 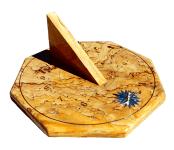 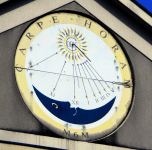 The most common vertical sundial is facing South, it is called Direct South. But the most beautiful layouts are obtained with sundials declining towards East or West.

As the declination increases, the style is more and more inclined with regards to the noon line (as it stays parallel to the pole axis), and the layout rotates with he equinoctial line.

Sundials with high declination are interesting, such as Direct East or Direct West sundials. Some even have a declination higher than 90° or are facing North. 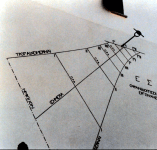 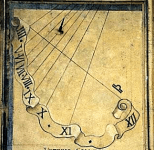 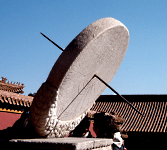 The equatorial sundial has its plate parallel to the celestial equator. Its polar style coincides with the perpendicular style. This sundial can work on both sides, each during half of the year. Around equinoxes, Sun is close to the equator and the shadow of the style is casted to infinity. Hour lines on an equatorial sundial are simple drawn every 15° by hour of time and they also correspond to the hour angle of the Sun.

The polar sundial has its table in the polar plane, inclined with the ground by an angle equal to the local latitude. The style is parallel to the pole axis and is usually installed on a rod or is made of a rectangular plate. Hour lines on a polar sundial are parallel to each others. Declination arcs are symmetrical with regards to the point A (center of the sundial). 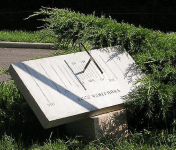 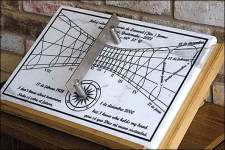 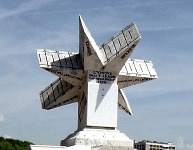 Multiple sundials are drawn on faces of a polyhedron more or less complex.

Such a sundial is quite unusual outside but is frequently found in museums, usually as an inclined cube mounted on a foot.

One of the most common type is the diptych that contains two sundials mounted in an articulated box, and in which the style is a thread tighten between the two parts of the box when open.

The most important point on a sundial is the end point of the style. It determines the point of shadow telling the hour and date. From that end, the polar style is attached on the sundial at point B, which is the converging point of hour lines, or the perpendicular style attached at point A, the center of the sundial.

Some sundials only have a perpendicular style, called the gnomon. But usually, there is a polar style, mounted parallel to the pole axis. It is sometimes reinforced by one or two feet, or is sometimes equiped with a sphere or a disc to cast a shadow mark that tells the date. When the polar style is a long rod without particular mark, then the sundial can only tell hour and cannot give any indication on date or Sun's declination.

Some sundials have a triangular style, filled or sculpted. On other sundials, the style has a pierced disc that casts a point of light on the sundial. This disc is usually supported by three legs or another fixture. In rare cases, the polar style is made with a thread tighten by a weight.